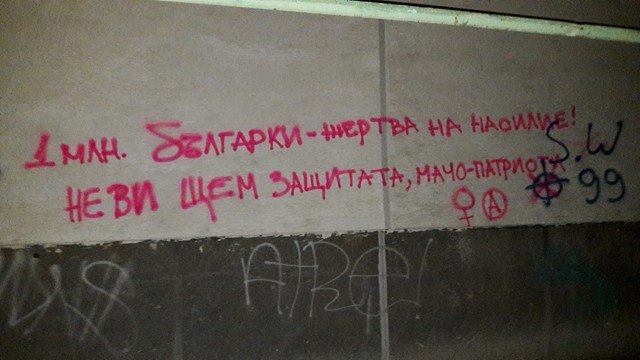 In 2019 in Bulgaria was dominated by neo-nazism, racism, social tension and violence

When fascism in is displayed in all its’ forms in Bulgaria, it is denied as a problem. With this short review of events that had happened in the public sphere, we aim at showing that fascism has become normalized and an everyday reality, which harms the whole Bulgarian society.

In January 2019 appeared a video in YouTube, showing two white men (“proud Bulgarians”) who are beating up and humiliating a Roma person. There is no official investigation of the case, which is one of many. Except a degrading act, it was an attempt at re-kindling ethnic  hatred and division.

This division was reinforced by the ruling elite from the clique of the “United Patriots” (“Obedineni patrioti”) and the vice-prime minister Krassimir Karakachanov who provoked a protest with a request for his designation because of his racist remarks – “gypsies in Bulgaria have become insolent” and “the tolerance of the Bulgarian society is over”. These words were his comment on a case of a fight between a couple of Roma people and a soldier in the village of Voyvodinovo. What followed these events was even more brutal – there was a collective punishment for the Roma in the village, who had nothing to do with this incident. They were evicted and their houses were destroyed.

In February, a few days before the neo-nazi Lukovmarsh, a woman is attacked in the center of Sofia because of her sexual identity. The perpetrator is a white man, who cursed her and broke two of her teeth  in broad daylight. The perpetrator was never found (or looked for).

Again in February, Krassimir Karakachanov sets an example for institutional racism by introducing measures for the “final solution of the gypsy question”, which in the way it is formulated evokes associations with the “Final Solution of the Jewish question” which resulted in the Holocaust. A part of the “solution” were measures such as the annullation of the status of a single mother for the Roma, labor duty,restriction of the birth rate of the Roma birthr rate, introduction of payment for emergency medical help and “the gypsies without an address” to be not allowed to inhabit their houses. His argument for this „solution“ was that there was no transparency in spending money for integration, confirming himself the big corruption in the sector.

On the 20th of April in Sofia was organized a meeting of neo-nazi organizations from Germany, France, Poland, Hungary and the Czech Republic. The date for such a European fascist event was not chosen by chance – 20th of April is Hitler’s birthday. The Bulgarian right wing extremists often organize events on this date with the pretext that they are „celebrating the April uprising“ (an important event for Bulgaria’s national liberation struggle in the 19. century). The hosts of the meeting were The Bulgarian National Union (Bulgarski Natsionalen Suyuz), main organizers of Lukovmarsh.

In October we showed to the world the face of Bulgarian football ultras groups. During the qualifications for Euro 2020 between the national teams of Bulgaria and England, the game was stopped two times because of racist chants in the Bulgarian audience. The positions about this by the president of the Bulgarian Football Union Borisslav Mihaylov and the coach of the Bulgarian team Krassimir Balukov denied the problem and shifted the focus of the debate.

The newly chosen persecutor of the country (after mass protests against his candidature because of corruption) Ivan Geshev also demonstrated his racist beliefs. In an interview for the national television, he declared that „it is what gypsies do“, using the word as an insullt against an opponent.

In November neo-nazis organized a march with torches in the center of the city of Plovdiv. Organizers were „Blood and Honour“ Bulgaria, Bulgarian National Union (BNS), White Front and Branitel from Stara Zagora. The authorities, of course were not preoccupied at all by the gathering of so many fascist organizations in one place – witnesses of the events share with the media that „the youths were acting friendly with the police who was protecting them.“ The lack of reaction to such an event is a scary sign of legitimization of neo-nazism and the ideologies of hatred in Bulgaria.

Except on the street, neo-nazism is rooting in the state apparatus. Representatives of the United Patriots (Obedineni Patrioti) made a suggestion to the police for volunteer units who will „fight against the Roma crimes“ (mostly stealing). In the vision of the patriots, these units can do civil arrests. We would like to remind that in 2007, The Bulgarian National Union (BNS) with a chairman Boyan Rassate declared that they will establish a national guard, who would fight the „gypsy terror“. The guard has uniforms that were almost identical with the uniforms of the Nazi stormtroopers.

One of the most notorious racists in Bulgaria continues to be a member of the European Parliament – Angel Dzhambazki. He has allowed himself to be racist in the tribune of the European Parliament, including towards his MP colleagues. In December he condemned drunk drivers, after which he was caught himself driving under the influence of alcohol. He did not hide the fact that he sat in his car with the clear conscience of being drunk. In 2018, he was caught with his personal weapon (a pistol) in his hand luggage at Sofia airport.

2019 was a year, in which were evident serious social issues. It was the year of the protests of the medical workers, the demonstrations against the candidature of the new prosecutor Ivan Geshev, the cancellation of the payments for the payment of the first day of sick leave for workers and many more.

The social climate was dominated by patriarchal violence. At least 25 girls and women lost their lives in Bulgaria, among whom a 7 year-old who was brutally raped, beaten and murdered. Among the women who survived was a young woman stabbed in a train and saved by a Roma man and the brutally beaten girlfriend of a policeman. In Bulgaria the violence against women is huge and ignored as a problem and the group of the United Patriots are directly responsible for every murdered, raped and beaten woman in Bulgaria, since they were the biggest opponents of the The Council of Europe’s Convention on preventing and combating violence against women and domestic violence (Istanbul Convention).

All these events represent a very well orchestrated process of confusion, division and polarization of society, as well as absolute fascisization of the minds of Bulgarians, who are constantly directed at looking for an enemy outside of the elites and the political class. The need for strongly opposing such tendencies is bigger than ever.