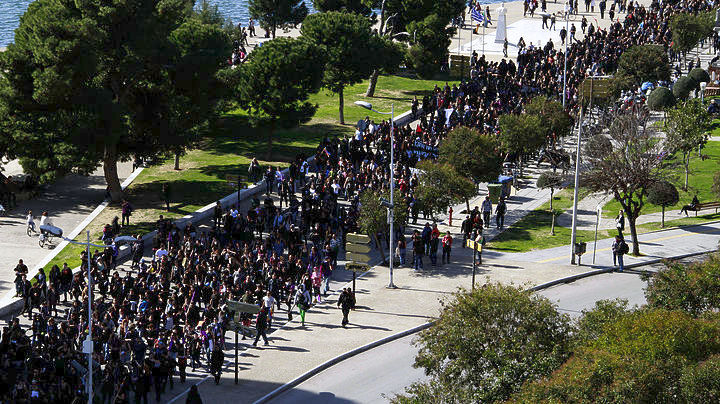 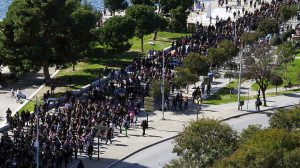 „Antifa Bulgaria will be joining the pan-Balkan, anti-nationalist demonstrations in Thessaloniki on March 10. We firmly believe that internationalist solidarity, cooperation and shared struggle are the path to challenging and crashing the rising wave of nationalism, locally and globally. Not so many years after the economic crisis and the subsequent violent restructuring of capital, nationalism is again a major threat accompanied by its close relatives – xenophobia, racism, militarism, sexism and often – explicit fascism and neo-nazism. After years of popular struggles against the crisis of bankers, politicians and neo-liberal clerks, the repression coming from the state and its elites is giving its fruits – instead of seeing deep economic and political changes, new horizons for human freedom and solidarity, public attention is diverted to new/old enemies – migrants, roma, LGBTI people, women and others whilst social marginalization and precariousness are used to for scapegoating the most vulnerable groups and sparking sentiments of hate. The danger of genuine fascist regimes coming into power hasn’t been so great for decades with extreme right-wing parties storming parliaments, municipalities, presidential palaces and European institutions. History is repeating itself and capitalism is putting on the black shirt once again after the liberal democratic state has cleared its way, ensuring that any real alternative and popular expression of anger is repressed by any means necessary.
In this climate the Balkans are once again pushed by greedy for power politicians towards the horrors of nationalism. Old “issues” are reinvented and sold to societies to mask the social catastrophe that the large majority of people on the peninsula live in on everyday basis. From the high tribunes of power we are called to “defend” national “values”, territory and faith and among the old “others” to hate (neighbouring countries, roma, LGBTI), new enemies are condemned – migrants, feminists, muslims. New-old maps of “Great put-a-name-of-a-country” are drawn and militarism is slowly making its way to normality. In these times our response in terms of organizing, fighting back but also – building alternatives, educating and expanding the margins of freedom, solidarity and autonomy – would be of decisive importance to determine whether the future would be a bleak repetition of the dark shadows of the past or would hold a new, better world. To quote Bookchin: “Whether the twenty-first century will be the most radical of times or the most
reactionary—or will simply lapse into a gray era of dismal mediocrity—will
depend overwhelmingly upon the kind of social movement and program that social
radicals create out of the theoretical, organizational, and political wealth that has
accumulated during the past two centuries of the revolutionary era.”
Building true revolutionary solidarity, fighting, learning and walking together are the only way we can face an enemy that is also paradoxically global whilst at the same time being locally ultra-nationalistic. Our participation in the anti-nationalist demonstrations in Thessaloniki will be with the firm conviction that walking and fighting shoulder to shoulder with our comrades from all over the Balkans is the most logical and true response to those who are again trying to separate us by lines in the ground and the mind. We express our solidarity with all those who suffer the daily violence of nationalism – migrants, roma, LGBTI people as well as with our comrades who have been targeted by nationalistic/neo-nazi gangs. We use the opportunity to express our solidarity with the comrades from Libertatia whose place was burnt down by fascists as well as with the recently attacked in Athens members of the social centre Favela, some of whom – the defendants of the murdered antifascist rapper Pavlos Fyssas. We stand by those who choose to fight back and don’t let a fascist attack unanswered, those who educate against the myths of nationalism, those who defend their community.“